Sen. Matthew Gaines’ Contributions to Texas A&M to be Honored with Art Installation

Campus community invited to a Nov. 19 statue dedication to acknowledge Gaines’ contributions to the founding of Texas A&M University. 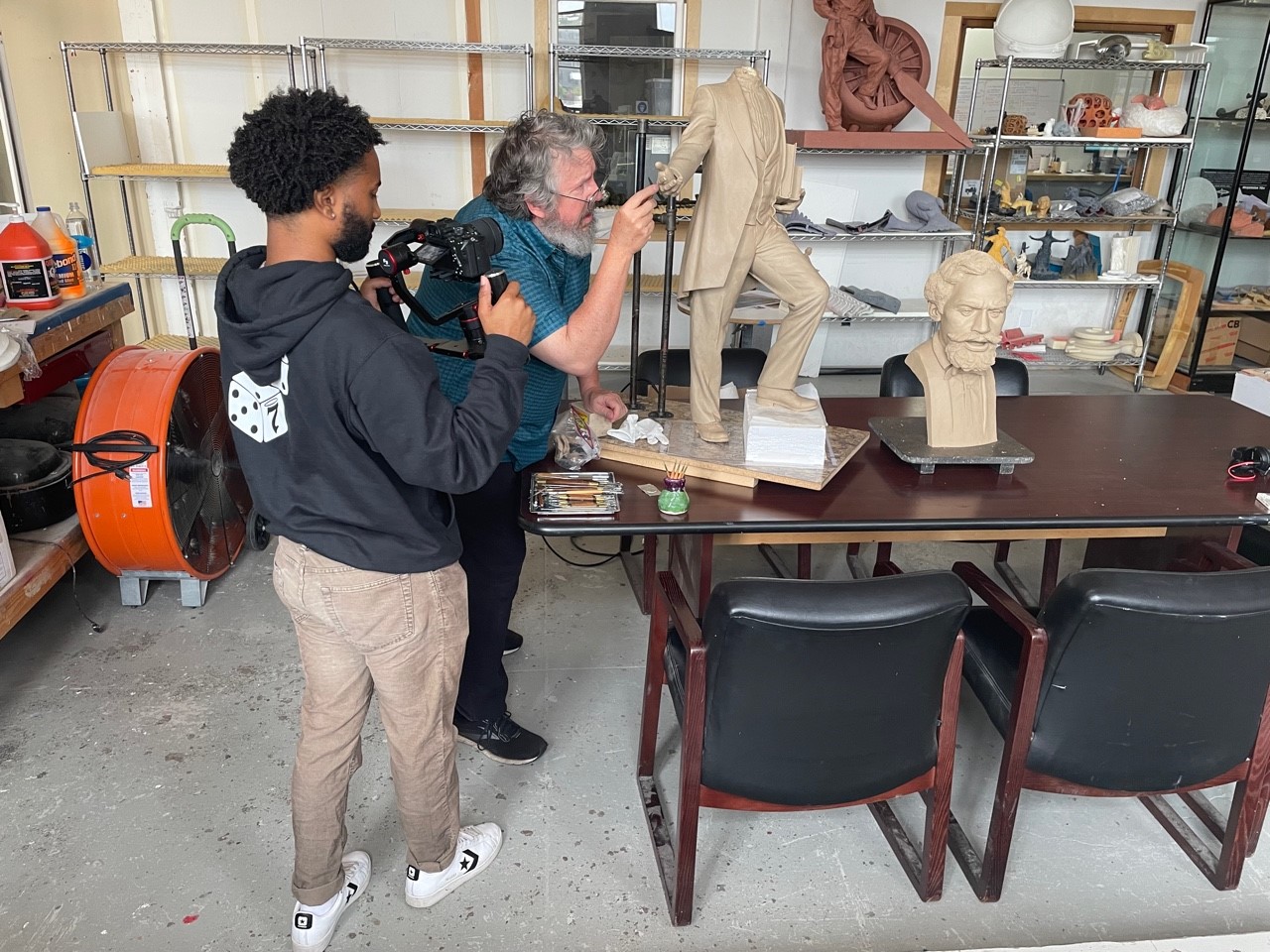 In 1862, Sen. Matthew Gaines played a role in the creation of what is now home to the largest student body in the United States, Texas A&M University. On Nov. 19 at 3 p.m., a persistent effort by students, faculty and staff spanning nearly 30 years will acknowledge the Texas senator with the dedication of a bronze sculpture in his honor in the heart of Texas A&M University.

The statue of Gaines will be located on the new Yolanda and Jimmy ‘65 Janacek Plaza between the Memorial Student Center and the Student Services Building. Private donors and the university committed more than $350,000 toward the effort.

Born in 1840, Gaines was a Baptist minister who served in the Texas Legislature during the Reconstruction era. A former enslaved person born on a plantation in Pineville, Louisiana, he was a staunch advocate from a young age for the rights of freed people. His leadership assisted the 12th Texas Legislature with taking full advantage of the Land-Grant College Act, also known as the Morrill Act, which created the Agricultural and Mechanical College of Texas, now Texas A&M University.

A Statue That Tells a Story

The artist team of David Alan Clark and Mary Johnson (MJ) Clark won the public art competition call in 2020. They developed a concept and began to sculpt a statue in honor of Gaines at their workshop in Wyoming. Clark and Johnson have a reputation of creating larger-than-life works of art that honor the history of the story they are helping to tell.

“We are particularly drawn to sculptures that depict those underrepresented in public art [women and people of color], and artwork that tells a story that needs to be heard,” said MJ Clark.

The Clarks start every art piece with research in order to create an original and compelling composition that tells as much of the subject’s story and personality as possible so that viewers may connect with it.

Aside from locating existing images of Gaines, the artists wanted to explore interviews about him and his own writing. They found transcripts of his speeches as well as clippings from newspapers reporting on the 12th Texas Legislature. Slowly, they built a picture of Gaines and his personality.

Next, the team created concepts for depicting Gaines. They wanted him to be viewed as a man of the people beginning to climb a low series of steps, carrying books, and reaching a hand out to help the viewer walk up those stairs alongside him.

“Gaines had to teach himself to read as an enslaved child, and books helped him to rise to a position of preacher in his community and senator in the state legislature,” explained MJ Clark. “Books and an education helped him rise up, and he wanted to share that with others.” 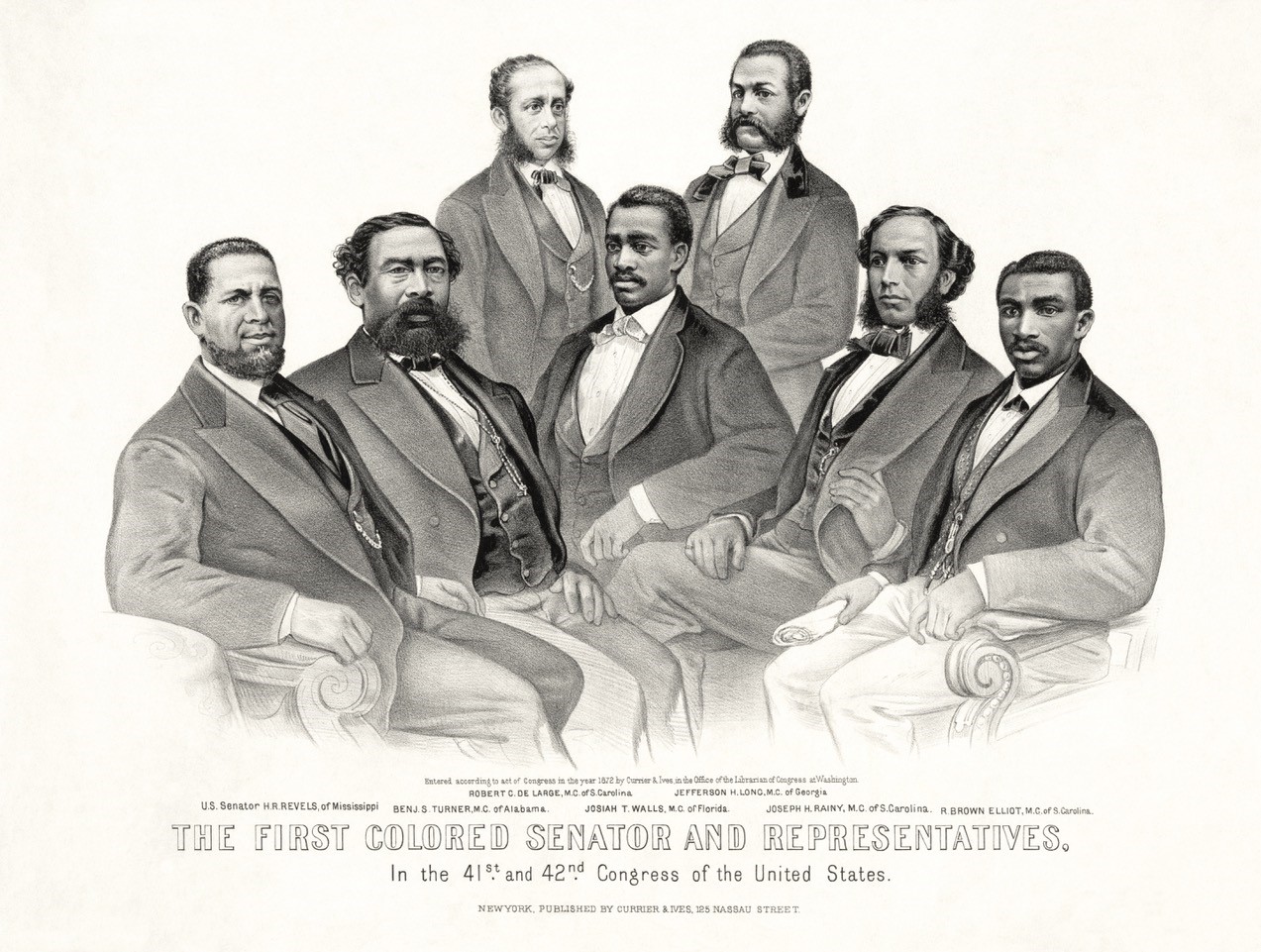 CREATING A LIKENESS - Commissioned artist team David Clark and Mary Johnson (MJ) used renderings of images of other Black senators and representatives, like this one, during the same timeframe Gaines served. Image courtesy of David Clark.

The greatest challenge for the artist team was the small number of photos of Gaines. They could not find a profile or full-length photo, which would have helped create an exact likeness of him. What they did find were images of other Black senators and representatives during the same time period Gaines served.

The artists wanted to ensure they captured the essence of how Gaines carried himself.

“This sculpture can have an influence on the ever-moving river of students and faculty who will walk past it on a daily basis,” she explained.

Decades in the Making

The effort to recognize Gaines’ contributions to the formation of Texas A&M has a long and at times contentious history. A Matthew Gaines Committee was formed in the 1990s with the support of the Aggie Republicans, the university’s Black Former Student Association, the Aggie Democrats, The Battalion, a number of other student groups, and numerous faculty members. The movement lost steam, however, in the wake of the Bonfire tragedy, a change in administrative leadership and an unforeseen budget crisis. 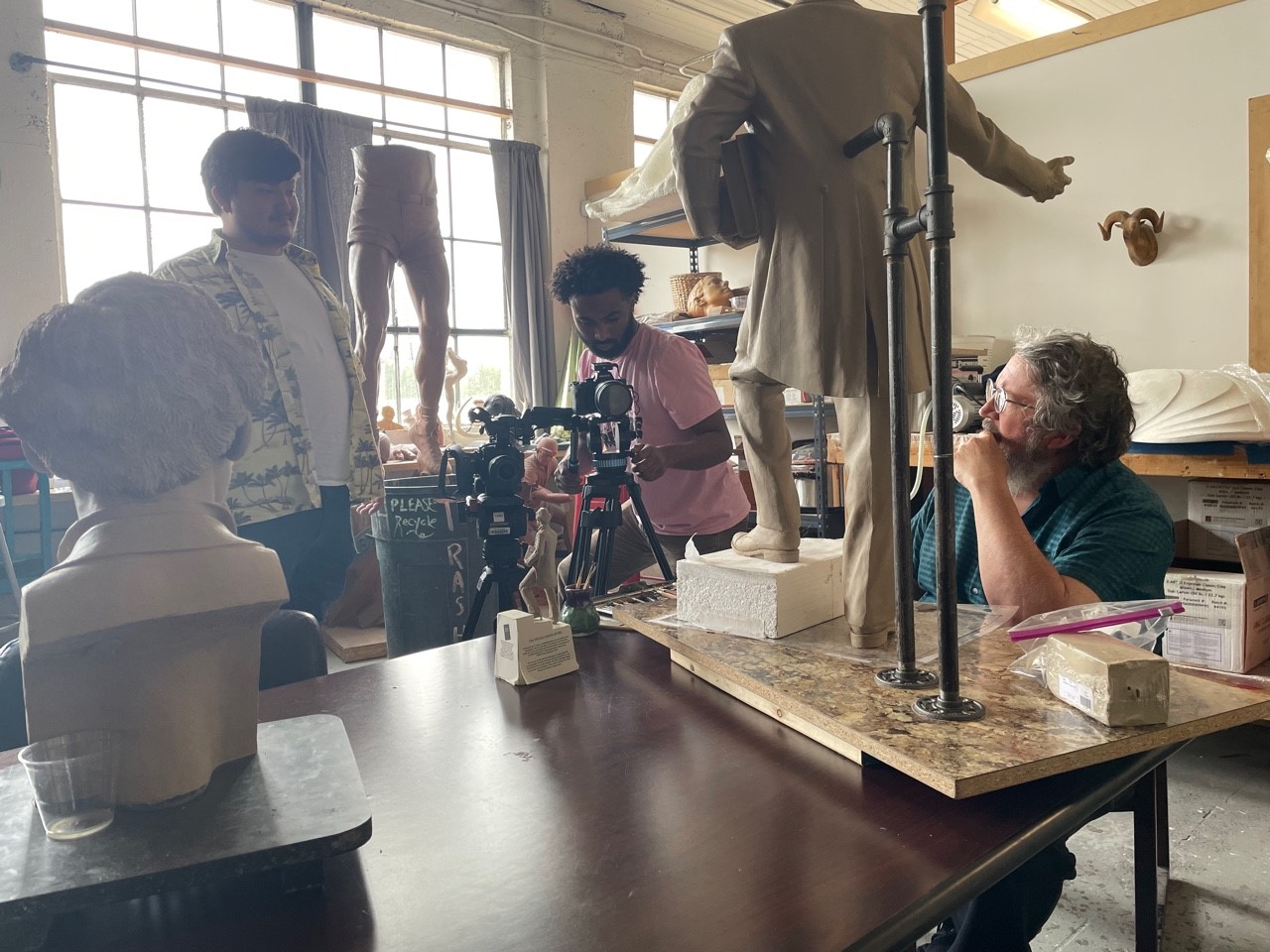 Additional efforts were undertaken in the early 2000s, again to no avail, but renewed momentum to acknowledge Gaines on campus began to build again in the past five years.

During the fall 2017 student legislative cycle, the Texas A&M University Student Government Association, the Graduate & Professional Student Council, and the Residential Housing Association each passed legislation in support of commemorating Gaines. Previous attempts to construct such a statue did not move past the student legislative process.

With strong support from former Vice President for Student Affairs Daniel Pugh and other Texas A&M faculty and staff, several students worked to raise a $35,000 commitment from the Texas A&M Black Former Student Association along with other gifts. Texas A&M also agreed to a financial commitment, which allowed the group to commission an artist.

Matthew Etchells '17, who served as the 2017-2018 Graduate and Professional Student Council president and was part of the Matthew Gaines Initiative during that time, said the placement of the Gaines statue helps tell the university’s origin story.

“As you walk from the Memorial Student Center and up the Military Walk to the Academic Building and then curve back around, it should be the narrative of Texas A&M,” Etchells said. “As you walk out of the MSC, you should see Matthew Gaines and that’s the first thing you read about. You can see a linear journey. Then as you walk around, you can read about Old Main and the Academic Building. You get a better understanding of our core values and our traditions and all these pieces start to line up. Without the inclusion of Matthew Gaines, it’s like starting a story but you’ve torn out the page that says, ‘Once upon a time.’ “

The Matthew Gaines Society is dedicated to furthering positive change across campus and works to empower and remind all students that they can make a difference. The society works to honor Gaines and continue his legacy in three ways:

The society recruits members who display a unique love for Texas A&M and a willingness to support the success of other members of the Aggie family. This art installation project was the culmination of many months of work from the organization's leadership to determine the mission and future of the society.

"Sen. Matthew Gaines' story, much like that of the society, highlights how one's dedication to public service can leave a lasting impact on their community for years to come,” said Aketch Osamba '22, president of the society. “As the statue dedication approaches and for years to come, the Matthew Gaines Society will serve as a reminder that when underrepresented student-led initiatives are given adequate resources, they can promote true change on campus." 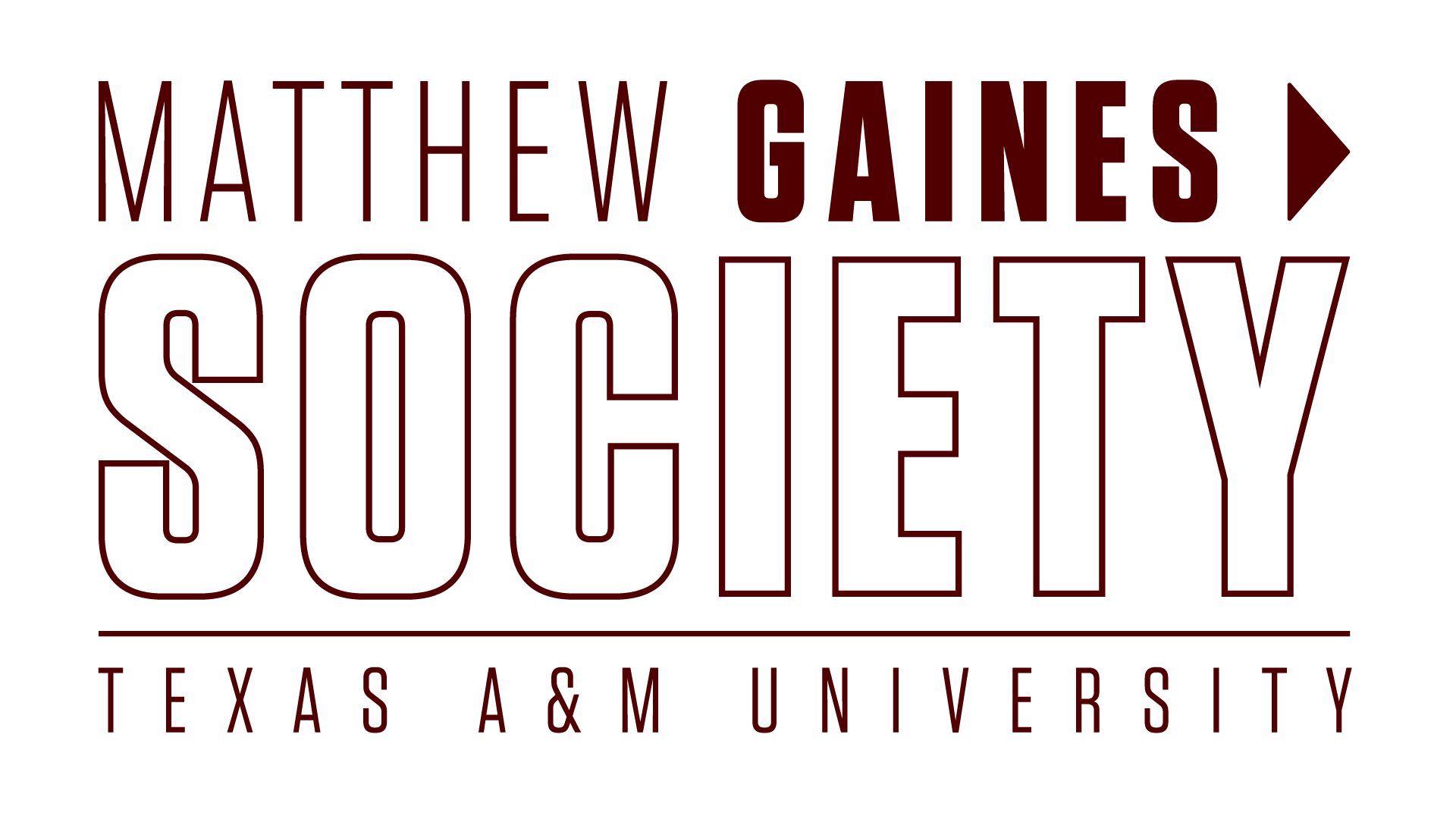